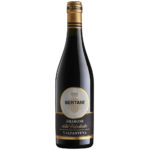 Bertani’s traditional devotion to producing Amarone is also found in this wine, a modern and balanced Amarone, but still authentic and rich in body.  This is a classic bottle for North Eastern Foods and Zhejiang Cuisine.  For western foods, this bottle needs a rich beef meal.

Bertani Amarone Valpantena is a wine that comes from the hills of the Valpantena, the only “cru” subzone in the Valpolicella area.  Bertani’s traditional devotion to producing Amarone is also found in this wine, a modern and balanced Amarone, but still authentic and rich in body. New fermentation technology and drying methods give balance and elegance to the wine’s exuberant fruity notes, blackberry flavour, hints of mint, sweet cherry and spicy notes that are typical of this valley.

Soil: The Valpantena hills, north of Verona. The soils are calcareous-marl in the east and calcareous-clay in the west, rich in iron.  The vines are vertical-trellised and Guyot-trained, with a planting density of 5000 plants/ha.

There are two principal climactic zones in Venetta: the alpine region, characterised by cool summers and cold winters with frequent snowfalls, and the hill and plain areas where the climate is moderately continental.  Logically these hills and plains are where most grapes are grown.  Solid and consistent periodical rain, with just enough summer to create slow maturing grapes that are perfect for vinification.

The harvest is done by hand and starts in the middle of September.  The best grapes are selected so that only the healthiest and ripest bunches are sent to the drying rooms of the winery in Grezzana, where they are laid out in single-layer crates.

In mid-January, the grapes are destemmed and crushed, then fermentation starts, at first at a temperature of 4°- 5°C, which then reaches 22°C in the final stages.

A part ages in Slavonian oak barrels with an average capacity of 250 litres, and a small part in barriques for about 30 months.

Bottling of Bertani Amarone Valpantena is followed by at least six months of maturation.

Tasting:  This wine should be decanted.  An intense red colour with purplish highlights. On the nose, marked and intense aromas of very ripe cherries, sour cherries, fruits of the forest, spicy and nutty notes typical of the Valpantena. Good follow-through of red fruits on the palate, with supple tannins to give depth.

Bertani Amarone Valpantena is a full-bodied wine that needs rich dishes, mature cheeses and strong-flavoured meats.  This is a classic bottle for North Eastern Foods and Zhejiang Cuisine.  For western foods, this bottle needs a rich beef meal.

Be the first to review “Bertani Amarone Valpantena” Cancel reply