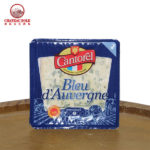 Bleu d’Auvergne is a French blue cheese named after its place of origin in the Auvergne region of south-central France.  The cheese can be made from raw or pasteurised milk and is sometimes attributed as cow’s milk version of Roquefort (although it is much creamier and buttery).

Bleu d’Auvergne is a French blue cheese named after its place of origin in the Auvergne region of south-central France.  The cheese can be made from raw or pasteurised milk and is sometimes attributed as cow’s milk version of Roquefort (although it is much creamier and buttery).  It was awarded AOC status in 1975 and is available in both artisanal and industrial versions.

Bleu d’Auvergne is produced in the “Massif Central” between Puy-de-Dôme and Cantal. The area is characterized by volcanic and granitic soil, which is rich in oligo-elements. Although sheep are mostly raised there, producers use cow’s milk for Bleu d’Auvergne, which gives it a creamier taste than Roquefort, made with ewe’s milk.

Bleu d’Auvergne is a creamy ivory colour, dotted with blue-green mould due to the Penicillium roqueforti which gives the cheese its typical bluish-green veins. It is aged for a minimum 4 weeks, by which time the cheese showcases its assertive flavours and smooth texture.

Bleu d’Auvergne was developed in the mid-1850s by a French cheesemaker named Antoine Roussel. Roussel noted that the occurrence of blue moulds on his curd resulted in an agreeable taste, and conducted experiments to determine how veins of such mould could be induced. After several failed tests, Roussel discovered that the application of rye bread mold created the veining, and that pricking the curd with a needle provided increased aeration. It allowed the mould to enter the curd and encouraged its growth. Subsequently, his discovery and techniques spread throughout the region.

Today, bleu d’Auvergne is prepared via mechanical needling processes. It is then aged for approximately four weeks in cool, wet cellars before distribution, a relatively short period for blue cheeses.

The rind is moist and sticky unveiling a soft paste with a grassy, herbaceous, and (with age) spicy, peppery, salty, pungent taste.  The cheese is often used in salad dressings, pastas and also is a good cheese for snacking.

The strong aroma and full flavoured characteristics of the cheese are at its optimum when served with sweet dessert wines such as riesling and sauvignon blanc or strong, robust red wines.  It’s a logical and perfect pairing for a good, robust Port wine.

Be the first to review “Bleu d’Auvergne Cheese” Cancel reply