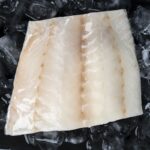 Icelandic Fish Bundle is our way to introduce you all to an amazing new source of fish that we have.  Hailing from Iceland where the entire fishing industry is underpinned with national laws that have created the Iceland Responsible Fisheries Programme.  Fisheries management in Iceland is based on extensive research into fish stocks and the marine ecosystem with the total allowable catch being defined each year by the government.

The first of the three fish in this bundle is of course cod.  Cod belongs to the family Gadidae and genus Gadus. Cod shares the same family of monkfish and haddock. It is omnivorous and feeds on sand eels, haddock, whiting, squid, small cod, crabs, mussels, lobsters, mackerel, worms and molluscs

While it might be tempting to some of you to cover it in batter and deep fry it, we would encourage either steaming or a slow low heat pan fry with a modest amount of extra virgin olive oil and fresh herbs.

The second of the three fish is halibut.  For those that don’t know, halibut is a large, flatfish.  In fact, the Atlantic halibut is the largest flatfish in the world. Its Latin name, “Hippoglossus stenolepis”, is misinterpreted by some to mean “Hippo of the Sea,” due to its large size.  However, the  Greek words glossa and hippos, mean “tongue” and “horse,” respectively.

Halibut has a gentle flavour that resembles the sweet taste of crab or clam.  It’s a good choice for people that don’t usually eat fish or don’t enjoy the more fishy taste of other fish.  It absorbs the flavours of seasoning and herbs very well.  Perfect for steaming, grilling or shallow frying.

This bundle includes 2 x 200-gram fillet slides of halibut.  A total of 400 grams of halibut.

This is the left-field curveball in the bundle.  A fish most people have never heard and so it’s perfect for us to introduce this fish and explain why we are behind it.

Arctic char is a member of the trout and salmon family, and it physically resembles the salmon. Its silvery skin is dappled with pink along the lateral line, and the fish sports green and blue colouration on its back and upper sides. Arctic char is also anadromous like salmon, migrating from northern lakes to saltwater to spawn.

It tastes lighter and more delicate in flavour than salmon with some people describing the difference as either slightly sweeter or less earthy than salmon.  However, where it really wins over salmon is the way that it is farmed.  Most salmon in the northern hemisphere are raised in offshore netted cages.  This is proven to create massive pollution in the sea from the surplus feed, the antibiotics, anti-fungal and anti-parasite medicine given to the fish, as well as surplus wasted feed and fish excrement.

Arctic charr are almost always farmed inland in vast pools with all water and waste being treated at water treatment and waste processing plants before the water can be discharged.  From an environmental impact standpoint, there really is no comparison between an industry that pollutes the sea on a massive scale (farmed salmon) and one that simply doesn’t (farmed arctic char).

Prepare and cook arctic charr in the same way as you would normally prepare and cook salmon.  Taste the difference, appreciate the price point (the costs for Arctic charr are comparable to farmed Norweigian salmon) and have a clean conscience.

If you do the maths, we have 1.76 kilograms of fish in this bundle for a total of ¥600.  That works out to about ¥340 a kilogram.  Imported premium quality fish is typically ¥300-¥400 a kilo.  Note the word “premium” – which obviously doesn’t include any of that tasteless frozen junk from some of the neighbouring countries.  You know exactly what we mean.

We want as many people as possible to get behind the Arctic Char so we’re adding a huge incentive to encourage the uptake on this bundle.  We are throwing in 2 bottles of Keeva’s Select Chardonnay as a free bonus.  It’s a perfect pairing for all three fish so it’s your own choice which fish to pair with our Chardonnay.

Be the first to review “Icelandic Fish Bundle” Cancel reply