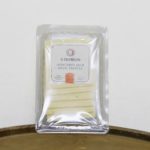 A modern spin on the classic American Monterey Jack cheese by combining it with truffles.

Monterey Jack earns the rightful position as a true “American” cheese since it originated in the Mexican Franciscan friars of Monterey, California. Around the 1700s, these monasteries around the Monterey region were making a semi-firm, creamy, mild flavoured cheese from cow’s milk which they aged for a little period.  An American entrepreneur named David Jack realized its commercial value and started selling it all over California. The cheese came to be known as “Monterey Jack’s” or “Jack’s Monterey,” eventually acquiring the name Monterey Jack.

The cheese is commonly used in Mexican and Spanish cuisine as its mild in flavour and melts really well. It’s akin in taste and texture to Colby and Cheddar.

This is a very modern spin on Monterey Jack, by combining it with truffles.

Show reviews in all languages (2)