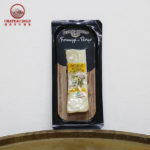 Occelli Castagno, or to give it the full name “Occelli in foglie di Castagno (in Chestnut leaves)” is a hard cheese that is left to age for about a year and a half.  The wheels are then wrapped in chestnut leaves which transform them and enrich them with a strong, exceptional flavour.  It logically pairs well with great Italian wines.

Occelli Castagno, or to give it the full name “Occelli in foglie di Castagno (in Chestnut leaves)” is a farmstead cow’s milk cheese from Beppino Occelli.  It is aged a year and a half and wrapped in chestnut leaves, keeping the cheese moist and imparting a heady aroma and sweet flavour.

Beppino Occelli began his life in the dairy industry back in 1976. you could say he’s possibly been ahead of the trend or even as bold as to say he’s been a trendsetter, firstly with his butter, judged amongst the finest in the world, and later with his cheeses.

He has always had a profound love for the land of his birth, the Langhe and the Alps.  This has led him to create his own style and interpreted new products from his beloved region, most notable truffles from Piedmonte, an area well known for its prized truffles such as the truffle d’Alba.  However, unlike France’s truffles where the prized ones are black Italy’s truffles tend to range from a light cream to a brown with white flecks.  The much sought after truffles are harvested in the winter months from October to December, but summer truffles are also found all over Europe but are less pungent

Occelli in Foglie di Castagno, like most cheeses from Piedmont, is made under a perfect storm of correct milk ratios and only when the chestnut leaves are fresh.  The cheese is firm with a crumbly texture, and an earthy aroma gives way to a sweet, nutty, slightly musty flavour.

The majority of red Italian wines from the north of Italy are a perfect pairing for this.    Chianti, Sangiovese varietal, Amarone, Barolo, Brunello, Barbera, Primitivo.  If the wine needs to be decanted for at least 60 minutes, then the wine is worthy of this cheese.

Show reviews in all languages (4)